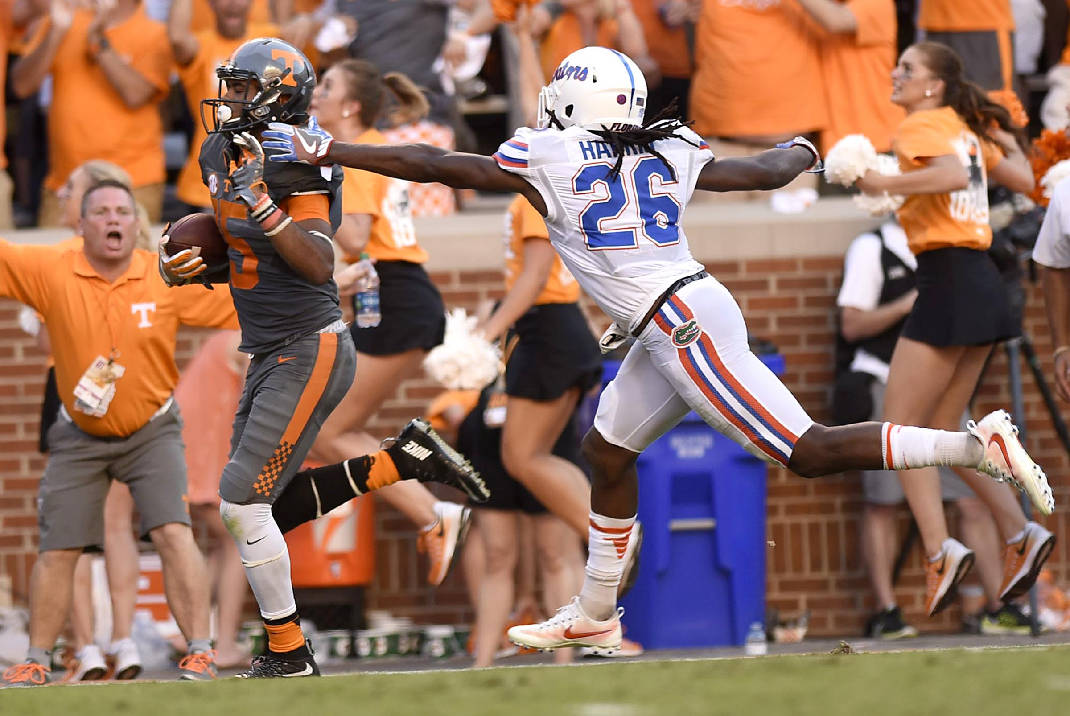 New Year’s Day is quickly approaching as 2019 is coming to an end, and with the 2010’s coming to a close, we have decided to take a look at the 5 best moments for Tennessee Athletics in that time span.

The 2010s were not exactly a happy time period for Tennessee fans as it likely includes the two most horrendous head coaches in Tennessee Football history, Derek Dooley and Butch Jones. With that fact being known, there were obviously some very deep lows for the program under both Dooley and Jones, including the worst season in the program’s history under Jones, in which the Vols finished 4-8 and failed to win a conference game. However, New Year’s Day is a day of celebration and a day when we look to the future. In that spirit, here are the top 5 best moments in the 2010s.

Make no mistake about it, Tennessee and Kentucky are two programs that despise each other. With that fact being known, it is not a secret that there will always be drama and suspense when Tennessee and Kentucky are meeting each other in any athletic event. Let there be no doubt, Tennessee has absolutely owned, dominated, and humiliated Kentucky for their entire existence and while UK has pulled out the occasional victory over Tennessee once in a blue moon, there is no doubt that Tennessee is the superior program and has been for some time.

However, 2018 was different, Kentucky was the 11th ranked team in the nation and most expected Kentucky to totally obliterate the Volunteers. But that case was not near accurate as Tennessee was the one who ended up obliterating Kentucky. The Vols’ defense held Kentucky to a single touchdown and Jarrett Guarantano led the Vols’ offense to a 24-7 victory over the Wildcats.

This game was symbolic of the entire Tennessee-Kentucky ‘rivalry.’ In Kentucky’s best season in the history of the program, they were still unable to beat Tennessee, or even keep the game respectable.

There was little hope going into the match-up against Auburn in 2018. In fact, the Volunteers had losses to West Virginia, Florida, and Georgia and none of those losses were even close. However, Tennessee had a bye week before their critical match-up with Auburn and SEC Nation even decided to hold their weekly show on the site of the game. Auburn was a double-digit favorite, but the upset pick was trending heavily among some media members.

The game was a squeaker that left Vol Fans sitting at the edge of their seats and screaming at their television sets. The Vols did a great job with their gameplan, they hung around with Auburn for the first half and when they got a break during the 3rd Quarter, Jeremy Pruitt slammed his foot on the accelerator becoming very aggressive with play calls. Jauan Jennings grabbed a ball in the back of the endzone to give Tennessee the lead, and Auburn never recovered from that deficit. A few minutes later Kyle Phillips crushed Auburn QB Jarrett Stidham, making him fumble the football. Alontae Taylor recovered the ball in the endzone for a Tennessee touchdown. The Vols went on to win the match-up in Auburn by a score of 30-24, sealing the first SEC win for Tennessee since 2016.

Unranked Tennessee was looking to make a big splash by upsetting the 19th ranked Georgia Bulldogs, but that dream appeared to be short-lived as the Vols quickly got into a 24-3 hole. However, just like the next two games on the list, Tennessee would come back from a huge deficit to claim victory. The Vols fought tooth and nail to get back into the divisional rivalry and after a fumble on a kick-off right before halftime, Joshua Dobbs was able to make it a one-score game going into the locker room.

Tennessee tied the game up on the first drive going into the second half and when Alvin Kamara gave Tennessee the lead the Stadium erupted with excited cheers. The game came to an end when a Georgia pass to the endzone was knocked down sending Neyland Stadium into pandemonium.

Tennessee was riding high following an extremely emotional 38-28 win over their archrivals, the Florida Gators, but now Tennessee had to move on to their next opponent, the Georgia Bulldogs, and a sold-out Sanford Stadium.

Going into halftime the Vols were down 17-7, but Vol Fans expected that to some extent. Up to that point in the season, the Vols were down at halftime to every team they played except for one, the mighty Wildcats of Ohio. In the 4th Quarter Tennessee turned it on, scoring two touchdowns to have a shot at winning if they could stop Georgia’s offense. Georgia had the ball at the Tennessee 47-yard line with 19 seconds remaining in the game, they had to find a way to get into the endzone. Jacob Eason snapped the ball and threw a rocket right over the head of Malik Foreman to Riley Ridley for the touchdown, giving Georgia a 3 point lead. The stadium was chaos, but it was about to get even more wild.

Dobbs and Tennessee had one chance, with 4 seconds remaining, to make a miracle happen. Dobbs dropped back in the pocket stepped up and heaved a pass to the endzone, where a massive pile-up was located. At the front of the pile was none other than Jauan Jennings who snatched the ball out of the air and sent the entire State of Georgia into disbelief.

It was a warm September day in Knoxville as the Volunteers and Gators were preparing to play their annual rivalry game. The stakes were high in Neyland Stadium as the game would decide who would take the lead in the SEC Eastern Division Standings, in fact, the game was thought to be the biggest of the week as Game Day even made their way to Rocky Top for their weekly College Football Show.

The game was a tale of two halves with Florida building a big lead in the 1st half and Tennessee absolutely obliterating the Gators in the 2nd. Tennessee starting QB, Joshua Dobbs, had trouble getting anything going on the offensive side of the ball as UT was held to just 3 points going into halftime. The score was 21-3, it was happening again, the Vols could simply not beat the Gators, ever. Tennessee fans were starting to give up and arrogant fans of the Gators, who were accustomed to always beating their rivals in Orange and White, were already beginning to claim yet another victory over Tennessee. ESPN even said that the Gators had as high as a 92.4% chance of beating Tennessee.

However, in the 2nd half, everything changed. Following a Josh Dobbs interception to start the half, something clicked for the Vols. After marching down the field, Dobbs delivered a beautiful pass to a wide-open Jalen Hurd for a 23-yard Tennessee touchdown, making the score 21-10. Tennessee scored, sure, that was bound to happen, but at one point the Vols were down by 21 points, there was simply no way humanly possible the Vols could come back from that kind of deficit. After a great stop by the Tennessee defense, Dobbs had an opportunity to cut the Florida lead to 21-17. He looked over the middle of the field to find Junior TE Ethan Wolf for the 20-yard touchdown reception. It was now a single possession game and Florida was getting nervous, they had to get a long drive on offense to slow Tennessee’s momentum which was surging. Unfortunately for the Gators that didn’t happen and just a few minutes later the play of the game would unfold. Jauan Jennings, a rising star wide-receiver from Murfreesboro, burned Jalen Tabor, the Gators’ best corner, for a monumental 67-yard touchdown.

The stadium erupted as Tennessee took their first lead of the game and now Tennessee found themselves in a very familiar situation. They were outplaying the Gators, in fact, they were manhandling Florida, but they had to find a way to slam the door shut and when Dobbs found Malone for a 43-yard touchdown they seemingly did that. Add in a 5-yard Josh Dobbs run for a touchdown and most Vol Fans thought Florida couldn’t pull off the comeback. When the clock hit zero the Stadium was deafening as 102,455 fans let out 11 years of frustration, disappointment, and anger; Tennessee 38, Florida 28. 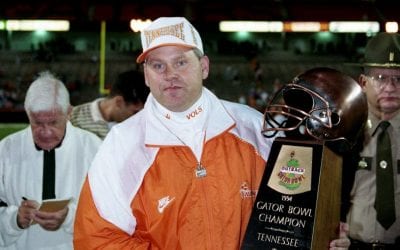 We asked UT Football Historian John Carter about the links between the two seasons. 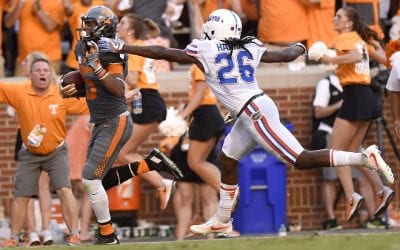